Neurodiversity: Creativity and Innovation Thrive When We Welcome Diverse Minds 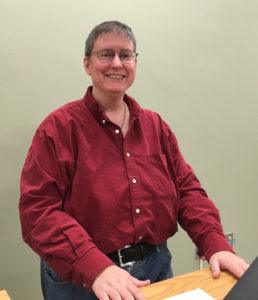 This presentation was delivered at the University of North Carolina’s Fourth Annual Disability is Diversity Week celebration, on Wednesday, November 9th, 2016 in Asheville, North Carolina

Thank you for having me here this week to share in your celebration of disability as diversity. I travel all over the country and I have quickly grown to love Asheville and this university for setting such a shining example to the rest of the country when it comes to opportunities for Autistic people and their families.

Let me start by telling you a little bit about myself and why I am talking to you today about neurodiversity, the diversity of human minds, and the crucial role universities play in fostering and supporting diverse minds both in academia and in the world at large. I’m Autistic. In a perfect world, my telling you that would not be much different from my telling you that I’m white, 49 years old, a musician, or a nature-lover. It’s a fact about who I am.

Being Autistic means that my nervous system, including my brain, is wired differently. Some of my senses, like hearing, are tuned so high that the world can be a painful place for me. Other senses, such as my proprioceptive sense — that is, my sense of where my body is located — are tuned so low that I have to move around a lot to feel comfortable. That’s just one small sample of the ways that my body and mind respond to the environment differently. My nervous system has a wide variety of interesting twists and turns and some of those twists can vary from day to day or even moment to moment. Each Autistic person has their own interesting nervous system and that’s why we can be so different from one another in so many ways yet all be Autistic.

As a child, I had a lot of difficulty with school. I wasn’t getting adequate support and so I tended to be disruptive in class, trying to get the sensory input I needed for those senses that were turned on low and trying to escape the sensory inputs that were too intense for me to handle. Any of you who have worked with Autistic children know what kind of challenges I was up against, not to mention the challenge I presented to my teachers. Those were less enlightened times and it can fairly be said that I got an education in spite of school rather than because of it.

We still have a long way to go, but our understanding of autism has evolved and more and more Autistic children are getting good educations as they grow into Autistic teens. There are even programs being set up to help the parents of babies with special needs, like the Babies Can’t Wait Program, which offer support and guidance on how to handle caring for and raising them. More and more Autistic young adults are graduating high school and seeking a university education. This is a terrific turn of events and universities are scrambling to set supports in place to help neurodivergent students succeed in college.

Neurodivergent? Some of you will be very familiar with that word while others have never heard the word before and are figuring it out through context. Neurodivergent is just what it sounds like: some people, like me, have minds that diverge from the mainstream. We are neurodivergent. You might have heard the word neurotypical used to describe people who aren’t autistic? Today I want to talk about the importance of supporting neurodivergent students — all those students who are not neurotypical.

All these neuro- words! The root of these words is Neurodiversity, the main word in the title of my presentation today — Neurodiversity: Creativity and Innovation Thrive When We Welcome Diverse Minds. I want to unpack that word a little bit because understanding what neurodiversity is (and is not) will help you understand why it is, or should be, such an important part of the university mandate.

There are three different but interconnected things I can mean when I use the word neurodiversity:

First, neurodiversity is simply a biological fact. We all have brains and all our brains have variations. We might use a word like “neurotypical” or talk about “the neuromajority” or even say things about “the average brain” or “a normal brain” but hopefully most of you realize that there is no such thing. Everyone’s brain is different from everyone else’s brain in ways both subtle and significant. Those of us who are identified as neurodivergent have more significant variation from the majority, but all brains differ and thus the word “neurodiversity” is a word that describes every one of us.

This is neurodiversity as a simple, undeniable, scientific fact. All of nature supports diversity and we have noticed that our natural environment thrives best when we work to preserve biodiversity. The world of ideas is not dissimilar from nature and universities have fostered a spirit of fearless inquiry and seek to create a sanctuary for human knowledge and wisdom. More on this notion of intellectual diversity and its intersection with neurological diversity shortly.

A third meaning of the word neurodiversity is political: “the neurodiversity movement.” The neurodiversity movement, which was born in the Autistic community but exists to serve and support all neurologies — particularly those of fellow neurodivergents such as people with ADHD (many of whom have chosen to identify as Kinetics to escape a pathologizing label), dyslexia, anxiety, bipolar, schizophrenia, and more — is a political movement seeking justice and equality for all those “differently-brained” people in every sphere of society, including the university.

So neurodiversity is a biological reality, a philosophy about that reality, and a political movement informed by that philosophy.

Now back to the mandate of the university and why I posit that upholding the neurodiversity paradigm – the philosophy that all brain types are valuable – is, or should be, part of that mandate.

Over 160 years ago, John Henry Newman wrote a book many still value today for the way he explained and defined the concept of a liberal education, “The Idea of a University.” In that book, Newman explains why it is important for a university to offer areas of study that still garner criticism today, such as the humanities.

“it is a great point,” he wrote, “to enlarge the range of studies which a University professes, even for the sake of the students; and, though they cannot pursue every subject which is open to them, they will be the gainers by living among those and under those who represent the whole circle. This I conceive to be the advantage of a seat of universal learning, considered as a place of education. An assemblage of learned men, zealous for their own sciences, and rivals of each other, are brought, by familiar intercourse and for the sake of intellectual peace, to adjust together the claims and relations of their respective subjects of investigation. They learn to respect, to consult, to aid each other. Thus is created a pure and clear atmosphere of thought, which the student also breathes, though in his own case he only pursues a few sciences out of the multitude.”

What Newman is describing could be called academic diversity or intellectual diversity and you will be hard-pressed to find academic faculty who believe a university should narrow its range and exclude wide swaths of intellectual disciplines from the educational menu offered to students and, by extension, to the world at large. At one time or another nearly every discipline universities embrace has been threatened with extinction by legislative budget cuts coming from outsiders unable to recognize the immense value that comes from art history, philosophy, musical performance, political science, theoretical mathematics, foreign languages, even English. Economic pressures and political forces focused more on everyday pragmatism than on the sort of creativity and innovation that fires the human spirit to ever higher achievements seek always to convert universities from temples of knowledge to cookie-cutter vocational pathways.

Universities resist this attempted narrowing of the collective mind every day. Yet what of the narrow range of the types of minds welcome to engage in this Great Conversation of universal learning?

Not only is there a place in academia for a wide range of minds, including those which diverge from the dominant majority of neurotypes, but the university needs neurological diversity in order to thrive and grow.

All great thought and innovation has benefitted from diversity of one form or another. African-American minds brought us the blood bank (Charles Drew), open-heart surgery (Dr. Daniel Hale Williams), an understanding of bioluminescence (Emmett Chapelle), the traffic signal (Garrett Morgan), the gas mask (Garrett Morgan), the synthesis of medicinal drugs from plants (Percy Lavon Julian), not to mention the literature of Maya Angelou, James Baldwin, Octavia Butler, W.E.B. DuBois, Ralph Ellison, Langston Hughes, Malcolm X, and so many more.

Accomplished and brilliant women are far too numerous to name, but a few of my favorites include Emmy Noether, who developed much of the mathematical modelling of Einstein’s theory of relativity, Rosalind Franklin, whose x-ray photograph of DNA revealed its helical structure to Crick and Watson, Jocelyn Bell Burnell, who discovered pulsars, Chien-Shiung Wu, who disproved a law in physics, the law of parity, that had been believed for thirty years prior to her work, Nettie Stevens, who discovered X and Y chromosomes.

I’m sure most of you are familiar with the Autistic agricultural scientist, Temple Grandin, and realize that it was her innovative work that is revolutionizing the cattle slaughter industry, making it simultaneously more efficient and more humane.

How We Teach Disabled People to Secretly Hate Themselves

I Don’t Have Privilege, Do I?