This is a re-post of an essay that originally appeared on Unstrange Mind November 10, 2015. 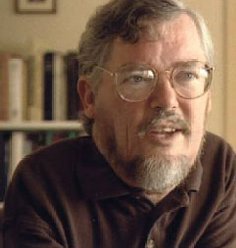 [image description: a photo of Dr. Paul K. Longmore. A white man with glasses, wearing a brown shirt with a collar. He has grey hair and a grey beard and mustache. His mouth is partially open as if speaking.]

I have many heroes, living and dead. These are people who are role models to me, people who have changed my life for the better and motivate me to work to change others’ lives for the better in return. Paul K. Longmore is one of those people who has paved the way for me to have a fuller and more fulfilling life. Longmore worked to make the world a better place for disabled people and his work has had a direct influence on my life. One reason I work so hard to make the world better for other disabled people is so that I can pay forward the great debt I owe Paul K. Longmore.

I learned about Longmore’s work shortly after I self-published my first book, No You Don’t: Essays from an Unstrange Mind. I had worked hard to write my collection of memoir-flavored essays about my lived experience of autism and my hopes for the children currently growing up Autistic. Not only did I write, revise, and edit all the writing, but I laid out the typesetting for the print version, designed the cover, and created the Kindle version. I spent many hours in front of a computer tweaking images by a pixel here or a pixel there and shuffling words around to prevent awkward widows and orphans (isolated bits of words at the top or bottom of a page, disrupting the visual flow of pages.)

The book released very successfully, considering what a small fish I am, and I dutifully reported my income from it. Social Security rules for earnings while living on SSI are designed to help disabled people transition from living on benefits to being self-supporting. A small initial amount is exempt and then SSI is reduced fifty cents for every dollar earned. So I expected my checks to be reduced by a small amount, but imagine my shock when my checks were slashed so dramatically that I couldn’t pay my rent anymore. (I had already spent the royalties I’d received in that first burst of sales on life necessities, assuming that I would still get nearly a full SSI check later.)

When I contacted the Social Security Administration (SSA) about the problem, it turned out that they were considering my income under the rules for “unearned income.” These rules are more draconian: one’s check is reduced dollar-for-dollar. This is why I never bothered to go get utility assistance: if an agency gives me money to pay my winter heating bill, that money is unearned income and my SSI check would be reduced by the exact dollar amount two months later. So all utility assistance does for a person on SSI is shuffle their expenses but it doesn’t actually help them in any way.

It took me months to straighten out my money situation with Social Security and I am grateful that my landlord worked with me during that time because otherwise, I might have become homeless in the middle of the battle. The SSA was applying the rules for royalties that come from things like mineral rights. If you are on SSI and strike oil on your property and sell that oil to a corporation, the money you are paid is called royalties and it is considered unearned income. I have no problem with that because selling mineral rights on one’s property doesn’t require a lot of effort on the seller’s part and the oil that is pulled out of their land is worked by someone else. That income pretty much is unearned.

But the royalties that come from a creative work of art are different. As I said, I worked hard for a long time to put that book together and I continue to work all the time to market that book. I continue to work, writing more essays and books and promoting them in various ways. The royalties I earn from my book are, indeed, earned. I haven’t yet earned enough royalties to compensate at minimum wage for the hours I put into creating the book. My task was to prove to the SSA that I had earned that money and deserved to have my income considered under the earned rules instead of the unearned rules. And when I set out to do the research to prove my case, that’s when I discovered Paul K. Longmore.

Longmore was a history professor and a disability activist. In 1953, at the age of seven, Longmore developed polio and lost the use of his hands as a result. He needed expensive medical care for the rest of his life, due to post-polio syndrome, and so keeping the medical benefits that come with Social Security disability was very important to his survival.

Longmore wrote an award-winning book, The Invention of George Washington, by holding a pen in his mouth and using it to type on a keyboard. It took Longmore ten years to write his book. I do not tell you of his writing process and the length of time it took him to write as some sort of inspiration porn. I tell you because it underlines how much the royalties from his book were earned income, not unearned in any sense of the word. Longmore worked hard on his book and it is a highly regarded book in its own right.

But the SSA did not share this view and Longmore was suffering as a result. The fact that they took away every penny he earned was bad enough, but he could not accept awards for his book if they included a cash prize and his healthcare coverage was at risk. Longmore burned a copy of his book on the steps of the SSA main headquarters in Washington, D.C., an act of protest that he wrote about in an essay included in his collection, Why I Burned My Book and Other Essays on Disability.

Longmore’s protest and subsequent lobbying lead to a change in the late Eighties to the SSA rules governing earnings from creative works, colloquially known as the Longmore Amendment.

This is just the beginning when it comes to learning about Dr. Longmore’s contributions to disability activism and I highly recommend reading his books and learning more about his life. Sadly, Longmore died unexpectedly in 2010 at age 64, but his legacy lives on. He is one of my heroes and I think he will become one of yours as well. Thank you, Dr. Longmore, for fighting for our rights.

When I took my information to the SSA — information about the change in rules and direct citations from the SSA’s own rulebook — my meeting was almost anti-climactic. My caseworker barely looked at my evidence and changed my earning status with no fight at all, treating me as if I were engaging in overkill by bringing in documentation (despite the way I had been treated earlier without documentation, even to the point of being lectured that SSI is “need-based” as if I shouldn’t even want to have a higher income let alone have a right to work for a higher income and a chance to transition off benefits, becoming self-supporting.)

My reception was irritating, but I got over it pretty quickly when I saw the results: I don’t have to report my income month-by-month. Every year, I submit my tax returns and estimate my next year’s earnings. My check is adjusted annually, based on projected earnings. I am free to focus on working hard to build my business of writing, speaking, and trying to help shape a future world that has a place for people like me.

I owe much of my continuing success to the work of Paul K. Longmore. I hope my work pays tribute to his memory. He is one of my heroes and role-models. Thank you, Dr. Longmore, for fighting for all of us disabled folk who are trying to build careers and touch the future through our work.