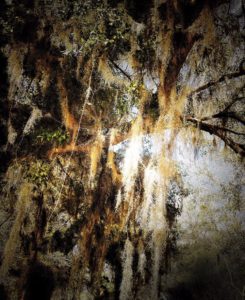 [image description: You are standing beneath a mighty live oak (Quercus virginiana) in central Florida, looking up at a heavy, gnarled tree branch dripping in Spanish Moss (Tillandsia usneoides). The sun is just hidden behind the branch and its light shines down through the limbs, illuminating the fluffy yet intricate twists of parasitic angiosperm, creating something of a magical, ethereal effect in the process. Photo copyright Sparrow Rose, 2016]

By now, pretty much everyone who knows much of anything about autism has heard of meltdowns — episodes of frustration and panic that seriously disrupt the lives of Autistic people, to varying degrees and amounts per person. But shutdowns don’t seem to get talked about as much as meltdowns and I run into people who, despite the blue-illuminated buckets of “autism awareness” out there, were completely unaware of the phenomenon of shutdown.

I had a pretty bad shutdown last week so I thought I ought to write a little bit about them. The people in my day-to-day life were unprepared to deal with a shutdown and that increased everyone’s stress levels. More education about shutdowns can’t hurt and it could help quite a bit.

Shutdowns and meltdowns are more similar than they might appear on the surface. One (somewhat simplistic but workable) way to think of a shutdown is a meltdown turned inward instead of outward, much as some people describe depression as anger turned inward. This can be incredibly hard to deal with, that is why some will have a plan to turn to that can help them support themselves through this when they feel ready to, whether this is doing something like video games to calm them down, you can visit this site to learn more about this, or be left completely alone to ‘reset’ themselves and become calm again.

My most recent shutdown started off as a meltdown. My brain was going through all its usual short-circuits when some synaptic gap got crossed. Or something. One minute I was out of control, smacking myself in the face, as one does, and the next minute I was on the floor, unable to move. I started to get tunnel vision. My hearing began to get fuzzy. My vision closed and closed like turning off an old tube-driven television, closing down to a tiny dot of light that winked out just as my hearing entirely cut out, leaving me alone in the numbly terrifying darkness. It seems likely that I would have needed medical assistance to recover from this terrible condition. A doctor may prescribe some medicines so that my brain can function normally. In many cases, medical professional recommends the use of medical marijuana for the relaxation of the mind. For that, it might be compulsory to have an online medical marijuana card, as it might be tough to get marijuana without it. However, it seems essential to consume these products, as there is a possibility of getting addicted to them.

It seems likely that I would have needed medical assistance to recover from this terrible condition. A doctor may prescribe some medicines so that my brain can function normally. In many cases, medical professional recommends the use of medical marijuana for the relaxation of the mind. For that, it might be compulsory to have an online medical marijuana card, as it might be tough to get marijuana without it. However, it seems essential to consume these products under proper guidance, as there is a possibility of getting addicted to them. As a result of the overuse of marijuana or other illicit drugs, addicts frequently lose track of their social, family, and work obligations, which could negatively affect their personal and professional lives. In such cases, a person may need to get enrolled in one of the rehab centers like Fusion Recovery Centers to get rid of drug addiction. Addicts at such facilities may benefit from various detox treatments, which may help to reduce their temptations to consume drugs repeatedly.

If you like to get your information from audio and video, you should take ten minutes to go watch Amethyst Schaber’s magnificent discussion of Autistic shutdown on their YouTube channel, “Ask an Autistic.” I’ll wait.

Shutdown is a response to overwhelm. It is a self-protective response — shutting down the circuits before they fry, to use computer/brain analogies — but it is as much a system overload as it is a system failsafe. And too much overwhelm for too long can cause some longer-term shutdown and loss of basic skills. We’re talking everything from forgetting how to tie your shoes to forgetting how to speak. And it can hit at age 14 or age 24 or age 54.

I my case, it was just a matter of hours before I started coming out of shutdown, much like an ocean creature finally creeping onto a deserted beach after a long swim across the Marianas Trench of shutdown. But I only had one, isolated shutdown. An extended amount of time living on “personal emergency reserves” due to being forced to operate at a higher clock speed than my chips are rated for, combined with a series of shutdowns would have left me pretty burned out. I’ve gone 17 days in shutdown before, unable to speak or properly care for myself. This is why shutdowns must be treated with caution and this is why going to apparent extremes to avoid shutdown is not “lazy,” “spoiled,” “entitled,” or any other judgmental adjective anyone has ever been tempted to drop at an Autistic’s feet. Or heap on an Autistic’s head, for that matter, since it’s often on the floor alongside the feet once shutdown hits.

Miller and Loos wrote about shutdowns and stress, both in a manner accessible to laypeople and in an academic paper. Their observations were based on a case study of an Autistic six-year-old girl who was prone to shutdown under stress. The authors found that shutdown behavior gets labelled as conscious avoidance but is more likely an involuntary physiological process caused by “stress instability,” an inability to regulate the body’s overwhelming response to stressors. The authors hypothesize that shutdown begins with the basolateral amygdala (BLA) in the brain and quickly spirals into a debilitating feedback loop: the BLA is involved in experiencing emotions. When the BLA becomes overstimulated, it can become hyperreactive, leading to extreme emotionality, heightened levels of fear, and social withdrawal.

The BLA can quickly become hyperreactive when exposed for too long to corticotropin releasing factor (CRF), a “stress-mediating neurotransmitter.” In other words, stress gives the BLA a hair trigger and the resulting explosions feed more CRF to the BLA, ramping the overload up in a ratcheting cascade of intense panic that finally flips all the breaker switches, resulting in shutdown. This is probably why my own meltdown tipped over into shutdown: I had been stressed for days with multiple meltdowns and my system just couldn’t handle any more stimulation so it shut off to prevent my brain from frying itself. My brain crawled up inside its own virtual Faraday cage to wait things out.

In the case of “the SD child,” Miller and Loos observed that one shutdown would make her extra vulnerable to more shutdowns during the following three weeks. It takes that long for the BLA to “come back down” from its hyperaroused state. It’s pretty easy to see how quickly things can take a bad turn if the brain is not given time to heal. This is the low-detail version of why I have a medical discharge from the Navy and why I was able to hold a series of minimum-wage jobs before the military but unable to get a job at all afterwards. When I signed up for the Navy, I didn’t understand my neurology. It was a devastating blow to not only fail at boot camp but come out of it so debilitated I couldn’t even keep a roof over my head any more.

This is why I speak so strongly about helping Autistic children to build low-stress environments that nurture rather than damage their neurology. This is why I warn so often against shaming Autistics for not “pushing the envelope” the way you think they ought to instead of the way that protects them from damage. Of course it’s healthy to step out of one’s comfort zone from time to time. What you need to remember is that the entire world is outside of an Autistic’s comfort zone. We live our whole lives outside that zone. Please recognize and honor that. I just can’t say that enough: we are trying and the obstacles can be as massive for us as they are invisible to you.

Treat shutdown as the medical situation it truly is. Help us get away from bright lights and loud noises. Help us find a quiet space to re-regulate our nervous system. And be gentle with us as we recover from a neurological episode, understanding how delicately balanced our brains are after marinating in the biochemicals of stress. We need support, not blame. We need peace and stress-relief, not punishment. And, always, we need love, understanding, and acceptance.