What It Felt Like When My Words Went Viral (Without Me) 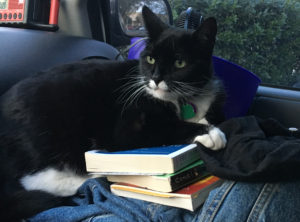 [image description: Fermat the Wonder Cat imitates the High Priestess card of the Tarot by gazing thoughtfully into the distance atop a stack of books. Photo copyright 2016, Sparrow R. Jones]

I had always secretly hoped that one day my words would go viral online. What can I say? I’m a writer and I work hard at my craft. When I see that an article I’ve written has thousands of views, I smile. A couple of times, I’ve broken a hundred thousand views and I felt an adrenaline rush as I watched the numbers rapidly rising over the course of a few days. This must be exactly the sort of feeling people who buy TikTok likes must get when they finally see their TikTok video shoot up into the trending videos. And what a feeling it is.

But now something I’ve written has actually gone genuinely viral and it was so upsetting I didn’t get out of bed for two days.

What? (I’m imagining you’re saying that as you read this) I thought you wanted your words to go viral? Why are you so upset?

Yeah…see…every time I thought about my words going viral or watched my numbers rise higher than they had before, those were my carefully crafted words that I had composed and published intentionally, with my name on them, wanting the world to read them and pass them around as much as possible.

But my words went viral in November without me. They left without my permission and without my name. They were not my carefully crafted words, meant for the world to see and ponder, reflect on and discuss, grow inspired by and feel moved to take action as a result of reading. They were angry words dashed out with little heed for grammar, spelling, gravitas or the carefully balanced triad of ethos, pathos and logos I strive for in my formal work.

An angry note I shot at a family member in the middle of a heated argument over the outcome of the presidential election — a note filled with all the adrenaline and rage of decades of family skeletons tumbling out of the closet into a clattering heap of bones on the floor at our feet — was what ended up all over Facebook, Tumblr, Reddit, the XKCD reader forum, YouTube video descriptions, meme graphic generation sites…..everywhere.

I am conflicted about my name having been removed. They were words never intended for the larger world and they were words of anger, a tormented howl of anguish. But they were mine. I reject them and I mourn my name being stripped from them. They were not my carefully crafted, painstakingly polished words, but the power they carry comes from years of work and practice, writing thousands of words every day, honing my craft, finding my voice. They were angry pencil jabs ripping through the paper, but they were mine and carried fruits of all my years of efforts off into the void where several other people grabbed hold of them and put their names on them. As much as it hurt seeing my words running around without me, it made me want to hurt someone else, seeing my words with a stranger’s byline.

I tracked down one of the strangers. She was hateful and admitted she had put her name on someone else’s words and suggested I sue her before blocking me. In attempting to track down another stranger, I encountered someone who had shared the words who I ended up blocking because she kept insisting I seek therapy. I’ll be the first to admit I’m pretty unbalanced these days, but I was not looking for life advice, just playing detective on how the words spread.

In part, I wanted to find the plagiarists who were so bold as to claim someone else’s words as their own and I wanted to ask them to explain the reasoning behind their choice. (As if I were expecting reason and logic from Thought Thieves?) I had half a mind to get in touch with lawyers like those on this site here and sue these people for what it was worth (not that I even knew whether I could do that, but I was angry). But in larger part I ached to know how my words ran away from me like that. How did a family argument that ended up with most of my family blocked on Facebook and the rest painful to even think about, let alone consider interacting with ever again … how did that turn into a run-away viral meme?

I will never know. Part of healing from the experience was admitting that I would never know and being willing to consciously let it all go, bid my words farewell, know that there are more words — there will always be more words — and focus on continuing on my journey, leaving my misbegotten words to work whatever dharma they might be working.

“You should turn those words into a op-ed piece and present it to the Washington Post and The New York Times, etc. Don’t worry about the Facebook crap. Take your words to a larger audience,” a stranger told me when I was struggling to track down who and how my words had gotten away from me. “Fight back. Get it published in a newspaper where millions will read them. Your words have power. You can use them to affect many readers. I was impressed by what you wrote and I don’t impress easily. Your words struck a deep chord in everyone who read it.”

Yes….I understand. That’s why words go viral in the first place. They touch a nerve in others.

I had really hoped that I could develop enough skill as a writer to do that intentionally.

I have beaten myself up over this, bitterly suggesting to myself that I should only write after getting myself really riled up first. If it takes being flooded with adrenaline to produce writing that people love enough to steal, maybe I should just live in an out of control emotional frenzy so I can create more words that will move so many people so deeply.

But that’s an painfully angry non-solution and I know it. Spending so much of my time in such a worked-up state would send me to jail, the madhouse, an early grave — possibly all of the above, each in turn.

I feel isolated. Not only was my name removed from my words — something that feels like having my identity stripped away, strange though that comparison might sound to others — but I feel like no one else on the face of the Earth understands why it affected me so deeply that I took to my bed for two days to recover. I feel completely alien and frequently foolish as I listen to others attempt to mirror my pain back at me only to reveal that they have utterly failed to understand why this event has struck such a blow that I sank into a pit of despair and (temporary) loss of creativity.

I am proud of my words. I am ashamed of my words. I am angry that strangers are claiming credit for my words. I am relieved that I am not being passed around the internet as “that angry person” or worse. More people have found my words moving than I’ve ever experienced before and I feel more isolated from the human species than ever before.

And that is what it felt like (and in painful moments, still feels like) when my words went viral without me.