What Is a Disorder? 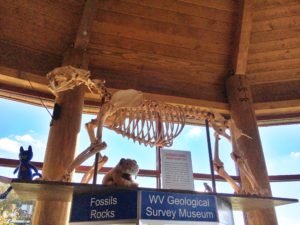 Smilodon fatalis, the sabre-toothed cat. The name means “fatal knife-tooth” and this was the most exciting creature I’d spotted on my travels since the Borophagus hilli,  “Bone-crushing Dog” I saw at the Hagerman Fossil Beds in Idaho last  year. I discovered this graceful yet skeletal creature at the I-79 Southbound West Virginia welcome center. Photograph copyright 2016, Sparrow Rose Jones.

Great article overall, but I’m a bit confused as to your meaning of ‘we are not disordered.’ As a person who does have multiple disorders aside from being autistic, I’m worried about what this implies when it comes to people with mental illness and other neurodiversities beyond autism; that maybe it is a ‘throwing one group under the bus to support another’ thing. I can’t imagine you meant that on purpose, and it certainly could be me misconstruing the meaning (it may have just meant to remember we are people before we are ‘disordered’) but I thought I’d point it out in case it was confusing to anyone else as well.

Before I start in to topics like “what is a disorder” and “why do I say that autism is not a disorder” and “mental illness” — because that’s a lot of ground to cover — let me make one quick side note first:

The Language of the Neurodiversity Paradigm

There is no such thing as “neurodiversities”  unless you are speaking in the same sense as modern physicists when they talk about “universes.” Neurodiversity is, to quote Nick Walker’s excellent and foundational essay: “the diversity of human brains and minds – the infinite variation in neurocognitive functioning within our species.” You can see why the plural form, “neurodiversities” doesn’t make sense….unless one is speaking of neurodiversity among multiple species or among multiple peoples, such as humans on Earth and denizens of some as-yet undiscovered planet with which we might establish communication in the future.

I think what you meant was “neurodivergences.” I apologize if I appear to be nitpicking your word choice, but the language of the neurodiversity paradigm and of the neurodiversity movement (two different things – see Nick Walker’s essay. It’s a must-read, really) are still new enough and the topic is important enough that we must all work hard to use this language accurately while these ideas are still taking shape in society’s general consciousness. The linguistic work we do today will save us so much difficulty and miscommunication in years to come. I am multiply neurodivergent and the accurate use of this language is very important to me because it provides such clarity in communicating my lived experience.

Now, on to the actual point of this essay.

What is a Disorder?

I can’t say enough good about Nick Walker’s work and if you have a couple of hours to watch his presentation from February 23, 2015 at CIIS, you should watch this video. I definitely recommend it, both for understanding why I say autism is not a disorder and for exposing yourself to Nick Walker’s brilliance.

For those who don’t have time or data to watch the video, here is my summary of Nick’s points that pertain to what I am discussing in this essay (there is so much more in his presentation than this. I love Nick Walker’s work so much. Every time I take the time to listen to or read Nick’s words, my entire world gets bigger.  Nick Walker is like human LSD: he expands my consciousness every time I take a dose of him.)

The following paragraphs are in italics because they are my paraphrasing (and sometimes direct quotation) of what Nick Walker says in the above presentation.

Diversity is creative potential. Exciting new things are introduced to society by people whose minds work differently from the minds of those in the culture around them. All forms of diversity are subject to society’s power dynamics, which means that those whose minds are neurodivergent — whose minds work in ways that are noticeably different from the neuromajority — are pathologized and called disordered or ill. It’s just another social power dynamic and an oppression of a minority’s civil rights, just like what we’ve seen before around gender, sexual orientation, ethnicity, culture, etc. The dynamics work the same way.

Books like the DSM tell us that autism and other neurodivergences are disorders, but it’s important to remember that science has been used for a long time to justify the oppression of those who diverge in ways that society does not approve of. The oppression of neurominorities that comes from using science to describe us as “disordered” is the same pattern we have already seen so many times in the past in other groups who have struggled to assert their civil rights against a society that chooses to pathologize their existence.

Pathologization of “disorders” leads to a social urge to normalize those who have been considered “ill” or “diseased” because their brains work in ways that differ from the “straight and narrow” neurotype that society has chosen to label as “healthy” only because it is way that the majority of people’s  brains work. The phrase “mental illness” is false and a scam. When these neurodivergences are labeled as illnesses, people are convinced that the way their brain naturally works is a disease. I’m not dogmatically anti-medication, but I’m anti-bullshit and I think the term “mental illness” is bullshit.

There are government labs where vials are stored. These vials have anthrax, small pox, measles, and other illnesses. You cannot have a “vial of bipolar” or a “vial of autism.” These do not exist outside the bodies and minds of the people who embody them. It’s us, not illness. When I say that “mental illness” is bullshit, I’m not saying nobody should ever take medication. If you are severely depressed and there is a drug that works for you and you want to take it? Go ahead. You should not have to call yourself “ill” in order to get the mind-altering drugs you want.  I don’t think people should be involuntarily medicated, ever. But I’m all for consensual medication of anyone who wants it.

There’s a whole industry around selling these things as diseases and we live in a society that is increasingly hostile to carving out niches for people who function on different rhythms. When you honor your body and brain, Bipolar no longer feels like an illness. You’re surfing your neurology. How do you find the safe spaces to shape your life? If no one does it, it stays unsafe for people to do. The more people out there doing weird stuff with their brains and self, the more acceptable it becomes. We have an obligation to be really weird to make space for other people.

So there’s the background to my answer: what is a disorder? A disorder is an illness. I have some disorders – a connective tissue disorder that can be very painful, for example. But autism is not a disorder. Bipolar is not a disorder. Schizophrenia is not a disorder. There is no such thing as a mental illness because our mentation is our self and we are not ill. We are divergent members of a neurodiverse population that needs the full span of neurodiversity to fuel creativity, innovation, and the full expression of humanity.

Am I Throwing Anyone Under a Bus When I Say That Autism Is Not a Disorder?

I most definitely am not. I am not saying , “autism is not a disorder, but some other mental stuff is.”  I’m saying exactly what I said in yesterday’s essay: “We are different and disabled but not disordered and we do not need you to accept a disorder; we need you to accept us.” I’m not saying other people are disordered; I’m saying Autistics are not. I’m not speaking for other people at all — it’s not my place to speak for other people … although I don’t believe in the construct of “mental illness”  so if anyone is calling someone else disordered, it’s not me. I didn’t think I needed to make that explicit, but here it is explicitly stated now.

Am I Saying We Are People Before We Are Disordered?

So, no. I am not at all saying that we are people before we are disordered. I am saying we aren’t disordered and it is an oppression to suggest that neurominorities are disordered at all. We are people: Autistic, Bipolar, Multi-dimensional, Kinetic, Schizophrenic, and so on. If you are in one or more of these categories and you have accepted that you are ill, disordered, diseased …. know that you are not required to view yourself that way. You are not required to accept society’s labeling of you based on your divergence from the mainstream type of mind. You are fully permitted to embrace your natural mind, as it is, for the beautiful and creative brain you possess. read more about the Neurodiversity Movement and Mad Pride and rejoice in your uniqueness. Celebrate it. Help to forge new pathways for those who will come after you. The more that we accept and celebrate our uniqueness, the easier and safer it will be for future generations to be authentic to their natural bodies and brains.

I hope that my words are somewhat less confusing now.