An Open Letter to Time Magazine and Joel Stein 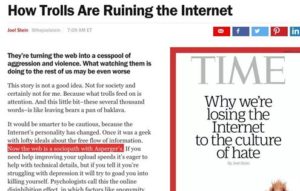 [image description: A screen shot of an online Time Magazine article with a highlighted sentence reading “Now the web is a sociopath with Asperger’s”]

update 8/18/2016: Time Magazine removed that sentence, either while I was writing or shortly after in a response to a flood of Twitter protests.

Waaaaaaaay down at the bottom of the article, the included the most bland apology possible: “Editor’s Note: An earlier version of this story included a reference to Asperger’s Syndrome in an inappropriate context. It has been removed.”

Just below that, it says, “This appears in the August 29, 2016 issue of TIME.”  If that means what I think it means — that the hate slur is also in the print edition, where it cannot so quickly be erased, Time Magazine owes the Autistic community a MUCH more sincere apology than has yet been offered.

update 8/20/2016: I just looked at the print version of this issue. As I suspected, the slur is there. You can see photos of it on my Facebook Page.  TIME Magazine and Joel Stein owe the Autistic community a HUGE apology for using our neurology as a slur.

I am Autistic. In your article published online this morning, you engage in the behavior you purport to bemoan. You have trolled me on the internet.

You see, I was already having a pretty horrible day today. It started with my usual morning activity: crunching the numbers and figuring out if I will be able to survive another month.  I have a really hard time keeping myself fed because I have multiple disabilities, including hypernychthemeral syndrome, which is like having my sleep-wake symphony conducted for an orchestra playing on Mars. No one wants to hire an Autistic who can’t stay awake, so I have been living 20 percent below the poverty threshold on government benefits while trying to build enough income through writing to support myself and my cat. We live in my van and we’ll make it another month, but only if I stop off at Salvation Army to pick up boxes of food.

Your article writes about a culture of hate online? Try living with half a dozen serious disabilities in the culture of hate that is everywhere around us. I’m talking about that culture that is always angry about “those people” who live off the government. I’m trying, I really am. But I started out behind the eight ball and it’s really hard to see my way out of poverty from back here.

So after that refreshing morning activity, I turned to this blog, writing an entry about how desperately disabled people need to be able to have emergency savings funds. We aren’t allowed to because if we have too much money, our benefits get taken away and we have no medical coverage, no place to live, nothing to eat. So we have to live on thin ice, hoping we never have an emergency or end up stuck with an abuser. In the case of Autistics, good luck on that last count. 83% of women with developmental disabilities have been sexually assaulted at least once in our lives. That’s dangerously close to all of us. And half have been assaulted more than ten times. More than ten times. Imagine that for a moment. Imagine the level of hatred a person would feel like their entire culture had leveled against people like them to allow such a travesty. That, Time Magazine and Joel Stein, that is a culture of hate.

You wonder why we’re losing the internet to a culture of hate? Have you lifted your head from your computer screen and looked around you lately? The internet is embedded in a culture of hate. It goes far beyond me and my petty problems, but let’s get back to my problems for now since you are part of them today.

After writing my blog entry about how hard it is for Autistic people to avoid getting abused by everyone who walks through our lives, given that so few of us have savings to fall back on when people start leveraging our fundamental human needs against us…not to mention those of us not allowed to have savings. Or marry. Did you realize that people on SSI lose a quarter of our income if we marry? And those of us living in group homes are often forbidden to have a romantic life at all. Our lives are carefully managed for us and too often our options are rebel and end up in a worse situation or quietly put up with what we have. Anyway, after writing about that, I took an academic survey about Autistic lives, social media, and quality of life.

That survey dropped me into a pretty deep funk. You see, there were a couple of questions that were a one-two punch to my gut:

“Please describe what the phrase “quality of life” means to you. Please also share what quality of life means for your own life.”

This question was almost too difficult to answer. All I could manage to do was define the phrase ‘quality of life’: “Quality of life is the assessment of how much or little a life is worth continuing versus committing suicide.”

That primed the pump and the next question was where the devastation really occurred: “How would you describe how autism affects your quality of life?”

Time Magazine, Joel Stein, I’m going to clean up my language for you now. This is the censored version of what those academic researchers got from me: “Autism does not affect my quality of life. The way the world treats people like me is what really messes with my quality of life. Then, as a nifty little reward for the PTSD I live with after putting up with a life of abuse for being different and predation for being extra vulnerable, the world tries to decide for itself whether I have quality of life or not. The world stops asking me and people like me if we think we have quality of life and decides people like me shouldn’t even exist. It dives deep into research on how to detect us early so we can be removed from our mothers’ wombs. Autism is fine. It is abusive jerks who refuse to understand what autism really is who are, to paraphrase Orwell, stamping on my quality of life like a jackboot smashing a human face forever.”

That is the culture of hate in which I live. It is a culture where the late Suzanne Wright of Autism Speaks was applauded for telling the Pope that we are innocents with no financial cares. She said we were like lepers and our parents were like Saint Francis, nobly taking care of us despite our affliction. She said that and I listened and I wept because I can’t afford to feed myself. I have friends who are starving, who live in housing without running water, who live with daily abuse. I have friends who have barely managed to leave facilities where they were repeatedly, painfully shocked on their skin any time they expressed a personal desire, such as wanting to leave their coat on instead of taking it off. I have friends who live in fear because their Autistic teens are large and Black and growing facial hair and that puts them in line to be the next Reginald Latson or Arnaldo Soto. Sadly, white Autistics don’t fare much better. Just ask the survivors of David Levi Dehmann or Kayden Clarke.

When you, Joel Stein, wrote these words and you, Time Magazine, published them, did you not get the irony of asking how the internet was turning into a culture of hate-filled trolls as you used my disability as a bludgeon? Did you not realize that you were crafting words of hate that are massively damaging to a population that already suffers hate and abuse? Did it not occur to you that your words would feed the depression of countless Autistics — myself among them — who grapple with depression, anxiety, PTSD, and a pervasive feeling that we live in a world that would rather see us dead than help us have quality of life?

Did you realize that there are studies out there that have found that youth with Asperger’s have a suicide rate 28 times higher than non-autistic peers? Did it occur to you that your words are exactly the sort of brickbats that contribute to that astronomically high rate? You are part of the problem you attempted to describe.

If you truly care about a culture of hate on the internet, you will retract your hate speech. You will apologize to Autistics and people with Asperger’s. You will do something active to make this world a better, safer, less hate-filled place for Autistic people, and you will never again deem it appropriate to use a vulnerable disabled population to make a pithy point. We are not your linguistic color; we are human beings.