What Would An Astronaut Do? 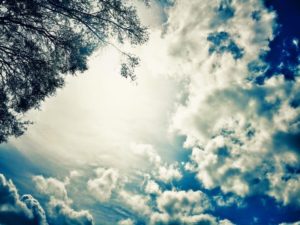 [image description: looking out into space from planet Earth during daytime.  In the upper left corner of the picture, tree branches are silhouetted against an ethereally glowing sky. The late morning sun is hidden behind a low-hanging bank of clouds, illuminating them against a sky that ranges in intensity from clear aqua to dark lapis. Photograph copyright 2016, Sparrow R. Jones, Taken in southeastern Gainesville, Florida.]

I winter in Florida, because it’s warmer and where my mailing address is.  Although I am nomadic, my official state of domicile is Florida.

I winter in Gainesville, because the city has laws to protect people like me. So long as I am legally parked, it is not against the law for me to sleep in my vehicle in Gainesville. This may seem ordinary if you’ve never tried living the way I do, but most clement places enact measures to keep “undesirables” under control. Every major city in California now has anti-homelessness laws on the books that were written to protect the people who do not like to see homeless people in public (rather than being written to protect the actual homeless people, themselves.)

If I wintered in California, I would regularly be at risk of having my van impounded as punishment for living in it.  I know, I know. It makes no sense to fight homelessness by taking away someone’s shelter. But it’s a real risk in many places. As for Texas, I have been hassled by the police after spending 18 hours at a designated campground.  I’ve never been bothered here in Gainesville for openly living my mobile lifestyle.

Gainesville is also a safe place to transition my gender expression. The mayor of Gainesville, Lauren Poe, recently wrote on Facebook: “If you are trans and feeling under threat, come to Gainesville. We respect you, love you and if need-be, we will protect you.” In a nation that seems obsessed with which bathroom I use, it is a great comfort to spend my winters in a city that added “gender identity” to their anti-discrimination laws in 2008.  Gainesville is a safe place and I can feel my spirit grow when I spend time here.

This winter, I read (in audiobook format) Andrew Chaiken’s epic 1994 book about the Apollo missions, A Man on the Moon, as I drove around Gainesville’s streets filled with murals and quirky folk art. When Mr. Kitty and I take a night trip down 8th avenue, through the Solar Walk, I like to imagine that we are traveling through space in our Escape Pod.  The sculpted concrete stars and planets on the sidewalk beside us are heavy echoes of the originals, gleaming high above. We are surrounded by stars.

It was on one of those night runs down the Solar Corridor that I realized my current life motto: What would an astronaut do?

I have been on a quest the last several years to improve my emotional self-regulation. I have progressed tremendously as anyone close to me will readily attest. What would an astronaut do? An astronaut would remain calm, particularly in a crisis.  An astronaut would not give up when faced with a problem, but rather think things through, logically and carefully, finding tools in his environment to achieve his goals.

The Apollo 13 mission nearly ended in as much tragedy as the Apollo 1 mission.  A cabin fire in Apollo 1 killed all three astronauts — Grissom, White, and Chafee — on the launch pad in 1967.  For a time, it appeared that the pilots of Apollo 13 — Lovell, Swigert, and Haise — would suffer a similar fate after an oxygen tank exploded, two days out from Earth, damaging the Service Module, thus also rendering the Command Module useless.  The interior of their spacecraft began losing life-sustaining heat quickly, water was in short supply, and the astronauts were at risk of asphyxiation from their own exhaled carbon dioxide.

What would an astronaut do? Get on the radio and calmly announce, “Houston, we have a problem here.”  Troubleshoot the problem along with help from Houston.  And build a carbon-dioxide scrubber out of a flight manual cover, parts from their space suits, and a pair of socks.

I have been working to incorporate the lessons of the Apollo astronauts into my daily life:

Maintain logic and problem-solving skills such as flexible thinking and improvisation.

Focus on the mission.

I’ve particularly been spending a lot of time thinking about what it means to focus on the mission.

Focusing on the mission means that the activism and advocacy work we Autistic adults and non-autistic parents of Autistics are doing is more important than interpersonal squabbles.  Sometimes we have goals so incompatible that we cannot work together, but whenever I am seeking the same goal as someone else, it is important for me to promote their work, no matter whether we get along as individuals. Focusing on the mission means trying to get along with everyone, but also staying socially detached enough to avoid allowing my feelings about a person affect my respect for their work.

I was writing something the other day, in which I mentioned “my mission.”  I have been thinking about my mission for a long time and, more and more, I have been wanting an actual mission statement. I talk about being on a mission, but I don’t always communicate that mission in specific, clear terms.

All people have inherent worth; human life cannot be valued in the coin of productivity. What makes people matter is that they exist.

There are no “special needs.”  All humans have needs and by calling some needs “normal” or “ordinary” and other needs “special,” we set one group of people aside as potential “burdens” who should be grateful for the “special treatment” they get.

Access is crucial for full participation in society.  The principle of universal design must be extended to all, making all public access accessible to people regardless of mobility, neurotype, physical appearance including race and size, gender, communication style, support needs, and more.

Respect autonomy and presume competence. The children of today must not be forced to suffer tomorrow the things we endured yesterday.

This is my mission and every time I ask myself,  “what would an astronaut do?” and the answer is “focus on the mission,” this is the mission.  This is what I am striving to draw more of into my life and, through me, into the world: more love, more understanding, more thriving.

And now I must carry on with the mission. Do carry on with yours and insofar as our missions intersect, may we always merge our efforts and achieve greater success than we each could have grasped alone.