How We Teach Disabled People to Secretly Hate Themselves

This blog post has been graciously translated into Russian by Neurodiversity in Russia. 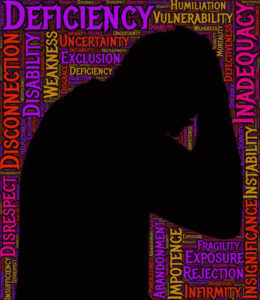 image description: a silhouette of an agitated looking person, surrounded by words of negativity and self-doubt, such as “deficiency,” “disrespect, ” “disconnection,” “weakness,” “rejection,” “abandonment,” “inadequacy,” and so on. Mixed in with these words is the word, “disability,” which does not deserve to be connected to words like humiliation, instability, inadequacy, and insignificance but still gets slipped into the mix unquestioned because society’s ableism is so deeply ingrained in our cultural views that it is virtually invisible.

It’s a fancy academic-sounding term: internalized ableism. It means feeling less worthy than others, ashamed of who you are, unwilling to stand up for what you deserve, or even hating yourself. And it’s so culturally supported by society that many people (including myself) can play host to ableist self-deprecation or self-loathing for years without even realizing it.

I have been working on my own internalized ableism for years and still keep finding pockets of invisible ableism in myself. Let me put that in more blunt terms: after years of working on loving and accepting myself, I still find entire areas of my life in which I have held myself back unnecessarily due to feeling unworthy on a fundamental level.

I’d like to share with you some of what I wrote on my private Facebook wall this week, to help you understand how damaging internalized ableism has been in my own life:

When my daughter died, there was a small voice inside me that said, “it might be for the best. You are poor. You are disabled. What kind of life could you have given her? There is a reason so many people in your life put pressure on you to abort her. Maybe keeping her was selfish. Maybe it’s better that she didn’t live. What right did you have to try to bring life into this world anyway?”

This is the first time I have fully admitted those thoughts in public. I tried once. I went to a meeting of Compassionate Friends, a support group for people whose children have died. I got the first sentence out, “I was thinking maybe it was for the best that she died…” When I was interrupted by the meeting leader.

He was angry. He shouted at me. He asked me if it was for the best that another member’s child had died in a fire, that one was murdered, that one had died from cancer, that one had been hit by a car. He shouted and shouted and there was no room for me to shout back, “I wasn’t talking about your children! I was talking about me and what a horrible mother I would have been. Maybe it was for the best because no one should have to have a mother like me!”

But I didn’t shout back. I cried. And I ran from the room. And I fell down in the parking lot because I was crying too hard to see. I banged myself up pretty bad, but it didn’t hurt. I was already hurting too much to feel it.

And here I sit, almost 22 years later. In the intervening years, I told myself that I didn’t really want her. I told myself that I didn’t want a child, that I loved my freedom too much to give it up. I reminded myself of all the sacrifices parents make for their children and how expensive children are. How expensive and noisy and messy and heart-breaking.

I congratulated myself for dodging a bullet and reminded myself how grateful I am to be unencumbered and not responsible for another human being’s well-being. And life. And suffering. Because if I had a child, they would just grow up to hate me for all my shortcomings anyway. They would hate me for bringing them up in poverty. And they would be ashamed of my disability. And I would be burdensome to them. And, knowing my genetics, they would hate me for the disabilities they were born with because I was too selfish to just not reproduce.

And I wish I had the courage and opportunity to be that fool.

And I know I won’t. Because I’m too scared, too poor, too disabled. And I would be a horrible mother. And my child would grow to hate me.

But I beg of anyone reading this, I beg of the world: there are younger people out there who would like to have a family but are being held back because they are disabled and people in their lives have taught them that they shouldn’t have children, that it would be wrong, that they can’t do it. Do not leave those young people to end up in twenty or thirty years where I am, wishing they could turn back the clock and have another chance.

Life’s own longing for itself. I missed my chance to fulfill it.

Feeling unworthy to have a family and raise a child is only one example of internalized ableism. People with internalized ableism can subconsciously (or consciously) sabotage their chances for a better education or a better job because they feel unworthy. They describe themselves using medical language of pathology because they were brought up to refer to their minds and bodies with words of lack and brokenness only.

Some forms of internalized ableism superficially resemble high self-esteem until you scratch the surface. I meet people who refer to themselves as “high functioning,” which might seem like a self-esteem phrase until you look a layer deeper and see the fear of being mistaken for “one of those.” When ableism is levelled against other people with your same disability but different support needs, it is a sign of internalized ableism as well. Those who truly accept themselves as they are have no need to punch down – whether directly or indirectly – against those with the same disability. Accepting yourself means accepting others who are like you, not fighting to distance yourself from those who resemble you in some way.

I see people recoiling from the word “disabled,” as if it were a great insult. You are fighting the wrong demons. Instead of fighting against the valuable and useful word “disabled,” please fight against the underlying ableism that causes you to recoil in horror from the word, “disabled.” Instead, do something pro-active to make the lives of disabled people better, happier, and more just. When you try to hide from the word “disabled,” you are only increasing the sum total of ableism in the world and that is what will truly hold you or your child back in life. Sadly, internalized ableism has held me back from so many things I wanted from life. It is a great injustice to allow rampant, half-hidden ableism to squash even one more dream. Root out ableism, both in society and within yourself, and let’s stamp it out forever.