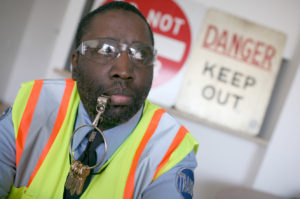 [image description: a photo of Darius McCollum. A bearded Black man with glasses wears a blue shirt with a transportation logo embroidered on the sleeve and a dark tie with a Day-Glo yellow and orange safety vest and holds a whistle in his mouth. He is in front of a sign that says do not enter – danger – keep out. The photo is from a 2016 New York Post article.]

Many of you have heard of Darius McCollum. He is the fifty-year-old Black Autistic man in New York City who has been jailed over 30 times for driving trains and buses illegally. He drives them safely and probably has more skill and knowledge than any official MTA employee, but because of ever compounding life circumstances, innocent driving that was secretly supported by MTA employees has escalated to a life of repeated criminal charges and years in prison.  At one point McCollum tried working in a transportation museum where he was very happy and his knowledge served the community well. When the museum director realized who he was, however, he was fired from that job as well.

McCollum’s lawyer is asking for letters and donations to try to save Darius McCollum’s life. McCollum is facing a judge who will decide whether he can finally get treatment for his impulsive nature — treatment he has never been able to get ever before in his life — or whether he will be locked forever in a prison for the criminally insane. That prison might as well be an execution because it would mean the end of the line for Darius McCollum’s chance at having a happy or fulfilled life.

If you would like to donate to his legal defense or write a letter to the judge pleading for treatment rather than imprisonment, visit the #FreeDariusNow website:

Below is the letter I wrote to the judge. Do not copy my letter. The judge will notice duplicate letters and, as a result, take our words much less seriously — if considering them at all. Write your own words and your own thoughts if you choose to send a letter. I am including my letter to help others understand the intense importance of McCollum’s case and to inspire others to write letters as well. The more sincere and carefully thought through letters the judge gets, the more chance we have to weigh in on Darius McCollum’s fate.

I am an Autistic adult, a writer and public speaker, and an advocate for Autistic people. I am writing to plead Darius McCollum’s case with you. It is my firm belief that Mr. McCollum does not belong in prison or in a facility for the criminally insane but rather in treatment that permits him to be part of society.

Mr. McCollum loves the transportation industry. He was fortunate enough to learn his passion at an early age and blessed to find acceptance and community for a time among the MTA workers who embraced and respected him. He proved himself motivated and responsible by sweeping trains and helping MTA workers with mundane tasks. Mr. McCollum is no irresponsible joyrider but a disciplined man who, through being misinterpreted and misunderstood, has missed his calling: a lifetime of service to the people of New York as a transportation professional.

The biggest criminal action in Mr. McCollum’s case is how life circumstances and the prejudices of those around him prevented him from following that calling. How many people sincerely wish they knew where they belong in this world? Mr. McCollum has known nearly all his life where he should be — serving the city of New York as a transportation professional. But his ambitions and dreams were thwarted every step of the way until we have come to this crisis point where the judicial system — where you, Your Honor — decides if the balance of Mr. McCollum’s life should be discarded forever to a grim punishment or rehabilitated.

In his 2018 book, Lost Connections: Uncovering the Real Causes of Depression and the Unexpected Solutions, author Johann Hari tells a story about a rice farmer in Cambodia who lost a leg when he accidentally stepped on an old land mine left over from war. The farmer was fitted with a prosthetic leg but fell into a deep depression. His neighbors recognized that the farmer was in pain, was struggling to continue his physically strenuous work, and lived in fear of stepping on another mine. The neighbors pooled their resources and bought the rice farmer a cow so he could become a dairy farmer instead. His depression lifted as a result.

The story of the cow highlights the importance of community in treating mental illness. Mr. McCollum does not belong in a prison for the criminally insane. He belongs in treatment and he needs his community to step up and “buy him a cow.” Mr. McCollum’s distress and mental illness is situational: it is caused by his community rejecting him and then repeatedly punishing him for following his dreams and pursuing the one career he found he could excel in. Even when he helped authorities make the subways secure after the tragic acts of terrorism on September 11th, 2001, he was punished for sharing his extensive knowledge and working to make New York safer.

All his life it has been Mr. McCollum’s dream to serve the people of New York and he has demonstrated his loyalty and devotion again and again only to be slapped down and punished again and again. Who among us would still be alive after decades of such a life? Mr. McCollum is a strong man and instead of punishing him I feel he should be helped in the hopes of ultimately permitting him to serve the people of New York or some other metropolitan area. With therapy to help Mr. McCollum address his impulsive nature and social services to help him adjust to life in the community after spending so many years behind bars, perhaps Mr. McCollum could graduate to working as a transportation professional — if not in New York City, in some other major city. If not as a driver, perhaps in a related capacity such as museum worker or service technician. His transportation skills and his deep passion for the machines of transportation and for serving the community are Mr. McCollum’s “cow.” Can’t we do everything in our power to build Mr. McCollum up rather than close the final jail door on his life?

Thank you for your time and consideration.