Dr. Simon Baron-Cohen Does Not Understand the Neurodiversity Paradigm 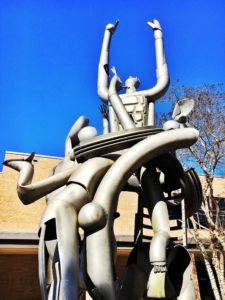 [image description: an abstract statue, “Winning”, in front of the Civic Center in Beaumont, Texas. It may be intended to portray the scuffle at the basket in a basketball game. Grey pipes and knobs intertwine to hint at a jumble of bodies with one person raised above the cluster, arms upstretched to the clear, blue sky. Photograph copyright 2018, Maxfield Sparrow.]

The Journal of Child Psychology and Psychiatry published an editorial perspective by Dr. Simon Baron-Cohen in their June issue that is only now beginning to get some media coverage. In his essay, titled “Neurodiversity – a revolutionary concept for autism and psychiatry,” Dr. Baron-Cohen makes a solid case through most of the piece for viewing autism through the lens of the Neurodiversity Paradigm.

From beginning to end, the piece is filled with what would otherwise be marvelous messages from one of the most prominent autism researchers in the world. Dr. Baron-Cohen speaks from a huge platform, so it is greatly heartening to read positive statements from the abstract — “Evidence at the genetic, neural, behavioural and cognitive levels reveals people with autism show both differences, and signs of disability, but not disorder. Disability requires societal support, acceptance of difference and diversity, and societal “reasonable adjustment”, whilst disorder is usually taken to require cure or treatment.” —  to the conclusion — “genetic or other kinds of biological variation are intrinsic to the person’s identity, their sense of self and personhood, which seen through a human rights lens, should be given equal respect alongside any other form of diversity, such as gender.”

If the entire essay actually promoted the Neurodiversity Paradigm, it would truly be cause to rejoice. Having Dr. Simon Baron-Cohen on board would represent the biggest boost the Neurodiversity Movement has ever seen. Sadly, there are two major stains on Dr. Baron-Cohen’s editorial. The first is his use of person-first language throughout the essay. How can Dr. Baron-Cohen claim to believe that autism is “intrinsic to [a] person’s identity” yet not even give a nod to identity-first language?

The importance of Dr. Baron-Cohen’s choice of terminology pales, however, in light of his choice to fold the idea that only some Autistics are not disordered, while others are, indeed, disordered (thus, one would assume, Dr. Baron-Cohen views those Autistics as “requir[ing] cure or treatment”.)  Dr. Baron-Cohen wrote, “‘Disorder’ should be used when there is nothing positive about the condition, or when despite trying different environmental modifications, the person is still unable to function. […] Using these definitions, we should remain open-minded that some forms of autism are properly thought of a disorder, and others not, given the heterogeneity that exists within this diagnostic category.”

Dr. Baron-Cohen has declared that some Autistics have nothing positive about their neurology.  And what of the second half of his definition of disorder? Those Autistics who are “unable to function” are disordered while, logically, those who are “able to function” are not disordered. But what does “function” mean? Dr. Baron-Cohen has gone one step beyond the “high functioning/low functioning” paradigm that the Neurodiversity Movement so strenuously speaks against and straight into functioning/not-functioning as his dividing line between who is permitted the human dignity of “identity, […] sense of self and personhood” and who must be “cured” of their “disorder.”

Not only is this attitude not at all in line with the Neurodiversity Paradigm, it is terrifying. Who gets to decide what “functioning” means? Who gets to draw that line between person and not-person? Are my friends who cannot drive (not all of whom, I should note, are Autistic) still “functioning”? What about those (also not only Autistics) who can’t manage money? Those who can’t work a job (you guessed it: also not only Autistic friends) and live on disability payments? Those who are unable to speak (yes, even these friends are not all Autistic) with their voice? Obviously, my answer is that all Autistics have personhood and “function” just fine.

Dr. Simon Baron-Cohen has inserted a chillingly genocidal twist into his version of “Neurodiversity” that is so overwhelmingly negative it erases any warm feeling I might have had about the marvelous things he says in the rest of his essay. I am left with the feeling that Dr. Baron-Cohen does not actually understand the Neurodiversity Paradigm and is merely repeating buzz phrases in, at best, an attempt to remain relevant and, at worst, an attempt to sabotage the Neurodiversity Movement.

Friendship, Support, and My Inner Circle