But What About the Good ABA Therapists? 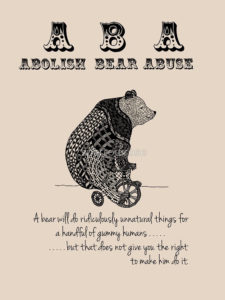 Image description: A hand-drawn bear of many textures is riding a tricycle. Above him are the letters ABA and below the letters, it says Abolish Bear Abuse. Below the bear, it says A bear will do ridiculously unnatural things for a handful of gummy humans … but that does not give you the right to make him do it. Available on t-shirts, stickers, tote bags, and more. Copyright Maxfield Sparrow

This week I ended up in yet another conversation with someone who wanted to defend ABA. He repeatedly asked us not to demonize ABA and kept dismissing discussions of the origins of ABA by saying that Lovaas is a long time ago and we can’t compare ABA to where it came from. Along the way, he used a racist analogy that I won’t repeat here.

He kept insisting that there are abusive ABA practitioners and good ABA practitioners so we shouldn’t vilify the entire body of ABA based on those bad apples. After several rounds of that, I wrote this and decided to polish it and share it here in my blog as well.  Thanks for reading!

My problem is bigger than ABA. I have a strong issue with the entire field of behaviorism from which it springs. (I know, I know. You have some analogy about how I shouldn’t judge roses unfairly because they grew from manure. Now we can skip past all these analogies. You’ve been heard there.)

Along came Skinner with his boxes and his pigeons and his scientific revolution. You can’t question a pigeon about her interior existence or enact the talking cure on her. All you can observe is her behavior. And so behaviorism was born, by studying animals and later transferring the methodology to humans.

Skinner didn’t originally want behaviorism to be applied to humans. Read Steve Silberman’s excellent history in the book Neurotribes for more details about Skinner’s concern and eventual yielding to those who wanted the theories of behaviorism to enter the field of human psychology.

This is why so much ABA looks like animal training: that’s where it came from. Watch anyone training a bear to do tricks and you will recognize the methods. (Any readers who have been traumatized by therapies should not watch videos of bear training. It gave me nightmares for weeks.)

And since Behaviorism rapidly became the gold standard for addressing autism, the toxic viewpoint and theories blanket nearly all autism projects, programs, theories, therapies, and classes. Most insurance will only pay for something named ABA, so everyone jumps into that name because it’s the only game in town. And the organizations certifying people as officially qualified to perform ABA are perpetuating everything that’s wrong with Behaviorism while veiling it in soothing words — often, ironically, Behaviorists use wording lifted from the Neurodiversity Movement but stripped of their intended meaning and context. It’s insidious and it’s awful.

And some good people slip through. Some people give lip service to behaviorism, knowing in their heart it’s the wrong approach, get their certification, and then get out into the world and practice with genuine compassion and help people.

And a lot of those people don’t have the resources to set up their own practice, so they go to work for someone else and are forced to do things they feel very wrong about if they want to keep that job. Those who don’t have the resources to quit and go work someplace else end up with PTSD over time because of what they are economically forced to perpetrate. I feel for them. I’ve met some after they quit and recovered somewhat. It’s a very real trauma they’ve experienced — the trauma of causing trauma in others.

I never did make that flaw in Behaviorism clear, did I? That flaw is the Black Box. Behaviorism is external. Behavior. What you observe.

True, but it’s designed to be able to glean all that from observing behavior, not from social-emotional bonding between client and professional.

You can talk all day long about practitioners who do care about their clients, who do bond with them socially and emotionally, who do care about interiority, etc. You and I both know that they exist. I have met some BCBAs that I really liked, who were genuinely good people.

But … in order to present ABA as something beneficial for ALL Autistics, it has to be something that can be done with non-speaking Autistics and show documentable results.

That’s the number one argument I hear from those who support ABA: “it works. It’s documented.”

Behaviorism, at its core, only cares about the exterior reality of a person. And until professionals start learning how to access interiority with non-speaking Autistics (it can be done. I know parents who do it every day with their non-speaking children) Behaviorism and ABA will always be the order of the day because ABA is easy and documentable and no therapist ever has to return 15 to 20 years later to clean up the mess when the trauma they started finally comes to full fruit.

Every oppressive system has many, many good people in it. People get caught into systems in so many different ways. I will never deny that there are good people out there practicing ABA. But there are far more people out there damaging children because they are working from within a system that, by design, damages people.  In the end, the good ABA therapists don’t matter. I mean, they matter as human beings and I feel for the struggles they will face if we manage to get rid of ABA and they have to re-certify in something else.

But it doesn’t matter that there are good people doing good work in ABA. The system is so flawed and so damaging those few good apples aren’t worth taking on the whole rotten barrel.

The “With Autism” Series