December 12, 2017 / unstrangemind / Comments Off on An Open Letter to Jon Stewart concerning #BoycottToSiri 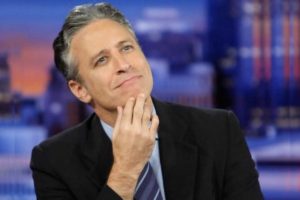 [image description: a photo of Jon Stewart on set, head tilted back at an angle and hand to his chin, looking thoughtful.]

I am writing to you because you endorsed Judith Newman’s book, To Siri With Love, calling it, “a beautifully honest and illuminating love letter to Gus, your typical atypical nonneurotypical human.”

I admire your comedic style, Mr. Stewart,  particularly the way your compassion and humanity shine through your humor. When the church shooting happened in Charleston, South Carolina, you joked about not having any jokes and then went on to talk about the “depraved violence” and the “gaping racial wound”. our country faces You spoke of the disparity of response between fearing foreigners would kill us and the all too common situation of “us killing ourselves.”

You lamented the “nuanced language of lack of effort” and predicted that people would shrug and say “what can you do about crazies?” Speaking of racism, you said, “we are steeped in that culture in this country and we refuse to recognize it.”

There is another culture we are steeped in that goes unrecognized. Most people are ignorant of the human rights violations and deaths this culture has directly caused over generations and still causes today. Those who become aware of some of the tragedy are too often able to easily shrug it off as isolated incidents, shrugs of “crazy people do crazy things” and the nuanced language of lack of effort.  The ignorance is so wide-spread that even you, Jon Stewart, who refused to joke after Charleston and wept on camera after the September 11 attacks, were able to blithely pen a little play on words in praise of a book promoting a future human rights violation perpetrated on a young man by his own mother.

You see, while I agree with you that To Siri With Love was honest and illuminating, I would not call it a love letter. Newman now claims she was joking, but in her book she repeatedly writes that she wants to get legal guardianship of Gus when he reaches adulthood so that she can have a vasectomy performed on him.

Mr. Stewart,  we do not live in Dickensian times when a child with no one to care for him or her will be left on the steps of an orphanage to live on gruel until being cast into the streets to take up with con artists and petty thieves. Newman fears that Gus cannot properly take care of a child and the responsibility will fall on her if she is still alive. If she has passed on before Gus procreates, she expresses a free-floating anxiety that the hypothetical grandchild will fall to some unknown fate so terrifying she refuses to even wrap words around it.

In this era of disability benefits and home care services — not to mention the woman who would co-create that new life with Gus as well as her family resources — there is no excuse for violating an adult’s dignity and autonomy by taking away their reproductive freedom. A developmentally disabled child should never be neutered like a pet dog. We are talking about human lives, human rights, and eugenics. If you want to understand how grave a claim Ms. Newman has made in saying she will take over medical guardianship and have a vasectomy performed on her son, read the story of Carrie Elizabeth Bell and the miscarriage of justice that led to her sterilization after Oliver Wendell Holmes, Jr. ‘s response to her rape was to declare that “imbeciles” had no right to have and raise families.

I have written more about this issue in my review of Ms. Newman’s book and I urge you to read my essay when you have finished reading this letter. And then I urge you to further consider the rights of those of us with developmental disabilities.  This country is steeped in a culture that declares us to be objects and possessions, not human beings. This country is so steeped in that culture that it might seem self-evident to you that Ms. Newman would, could, and should choose to take away another adult’s reproductive rights because that adult is her son and her son is Autistic.

Please work to understand our oppression, just as so many white people have worked to understand the gaping racial wound of systemic racism. Please stop endorsing works that promote dismantling the already scanty rights of people with developmental disabilities. Please promote work that seeks to bring us to the table and respects our right to have a say in our lives and futures.

I hope that you will make a public statement against sterilizing developmentally disabled people. Barring that, I at least hope you will make a personal commitment to no longer endorse the work of those who would claim — or even ambiguously joke — that having an adult sterilized against that adult’s will is appropriate. It is not appropriate; it is abhorrent.

And if you will do none of the above, I at least thank you for the time you spent reading my letter and thinking about what I have written.

Thank you for both your comedy and your compassion. I hope that your heart and mind are open to us, Mr. Stewart.  We could surely use as passionate and witty an ally as you.

Why Do So Many Autistic People Flap Our Hands?