A Close Call with a Whole Gale Storm 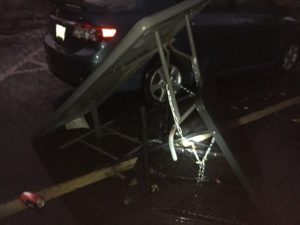 [image description: two heavy metal folding tables held together by chains to prevent theft. The tables are heaped in a darkened parking lot, where the wind casually tossed them after they nearly crushed Sparrow. Photo copyright Sparrow Rose, 2017.)

Natchitoches is the oldest settlement in Louisiana and it’s a lovely little town with colorful stucco buildings sporting second-story verandas with ornate wrought-iron railings, brick streets, and towering magnolias and live oaks. The house from Steel Magnolias is here, as is an alligator feeding show I was eager to check out. It looked like a perfect place to pause for the Memorial Day weekend, to catch up on work before heading toward Houston. Little did I suspect I would find myself in a life-and-death battle here Sunday night.

There was nothing remarkable about the day. The weather seemed fine, if extremely humid. Sunset was due in about 20 minutes. I was reading a novel about the mother of an Autistic boy (I’ll be reviewing that soon on Thinking Person’s Guide to Autism) when my weather app, Dark Sky, flashed an alert on my screen, letting me know that heavy rain was coming in ten minutes.

I had a couple of quick chores I needed to do that were unpleasant in the rain, so I quickly did them: I filled my water jugs and emptied my trash, including cleaning the cat box, thinking how nice it would be when the rain came and cooled everything off a little. I was parked on the east side of the Walmart and when I took the trash to a trash can, I could see past the store to the western sky which was dark grey with a huge wall cloud filling the sky.

I returned to the minivan and the bulk of the Walmart hid the western sky from my sight once more. The rain started almost right away. I congratulated myself for getting everything done in time to stay dry. My self-congratulatory mood didn’t last long.

The rain came down so hard that the parking lot was filled with inches of standing water. Heavy winds began bringing wave after wave of water rushing toward me. The van began to rock with the impact of the wind. I decided to check my weather app to get a better idea of the storm’s intensity and expected duration. What I saw chilled me. Tornado Warning – funnel sighted, take cover immediately. If you are in a vehicle, leave and seek shelter right away.

I quickly typed “Shit. Tornado warning.” on Facebook, thinking if the worst occurred, at least my friends would know why I had disappeared. Because I travel and spend so much time away from anyone I know, I regularly take measures to enable those who love me to help find me if something should go terribly awry.

I had to act fast. I quickly debated whether to bring my cat or not and decided to leave him. His smaller mass would protect him a little if the van went tumbling and taking him out into that solid wall of rain would not go well. He would have immediately clawed his way free and probably gone under the van. I wished him luck as I grabbed my phone, keys, and the festival pack I keep my money and identification in. I didn’t wait long enough to cram my keys and phone in the pack — I just opened the door and slipped out, locking it behind me.

The rain was pounding and thick. The wind was coming from the west, so I didn’t feel the full force right away because the building blocked some of it. But as I ran toward the Walmart, the wind lifted the two tables in the employee break shelter beside the building. Even with the building blocking the wind, it was powerful enough to pick up those two tables and send them hurtling straight toward me. I watched it speed toward me, a wall of certain death aimed right at my torso and head. I tried to move aside but the wind was so fierce it was like a solid object, unyielding.

At the last possible moment, a side gust of wind knocked me off my feet and turned the table into a curve ball, sending it veering off to the south. I scrambled, half-crawling, toward the building. The wind was too forceful to get past the edge of the building to the door. All the parking lot lights flickered and went out. I took advantage of a niche in the architecture where two walls came together and pressed myself into that corner, watching tree branches and other large, unidentifiable objects go flying past the building.

I had lost a shoe when I fell. Worse, I had dropped my keys. I scanned the ground in front of me as best I could through the storm but all I could see was wind-tossed debris. I knew I couldn’t go back out into the full force of the storm to look for my keys. All I could do was hope they couldn’t get blown into the next Parish before the storm ended. My immediate survival seemed more important than my keys, even though I had no idea how I would get back into my minivan — my home — without my keys.

I have no idea how long I stood there, squeezed into that niche. I took off my glasses, made useless by the rain, and tucked them in the pack. I typed some words of update on Facebook, then tucked my phone in there, too. With everything secured, I made another attempt for the front of the building and succeeded this time. With the power out, the sliding doors wouldn’t open! I was now out in the full force of the storm and stuck outside! I continued past the second door to take cover in the corner between the glass doors and the brick wall, a smaller niche but still some shield against the projectiles flying through the air.

A powerline directly over my head whipped back and forth ominously and I hoped it wouldn’t break loose and come down on me with a shower of sparks. It held. Debris continued to fly past me, mere inches from my face now.

Having nothing else to do but wait, I typed more updates on Facebook so people would know I was still alive. The people inside the Walmart forced the sliding doors open behind me and the wind pushed me inside the building.

Once inside, my nerves finally caught up with me. Everything had been too immediate to feel fear, anxiety, or panic while outside. Now my body trembled. The people inside seemed not to understand what it had been like, being stuck outside the building. I was counseled to never worry because Jesus is always watching out for me. “Well, eventually he will call me home,” I responded. “I’d prefer that weren’t today.”

While we waited for the storm to pass, everyone’s phone suddenly sounded an alert. I looked at mine and it warned of flash flooding. Knowing we were right on the river, I asked if the Walmart were on high ground and was reassured by many that the river would take days to rise high enough to reach us.

Finally the wind died down. I had to ask several Walmart employees before I found one willing to get a flashlight and help me look for my keys. He offered an umbrella but I was still dripping wet so I didn’t bother. Out we went into the rain, with lightning flashes so bright they briefly lit the parking lot as bright as day. I found my shoe first, which surprised me because I didn’t expect to find it at all. The employee found my keys and I was so relieved I hugged him in gratitude.

My van has some new dents and scratches from the shopping carts that were flung into it, but no windows or lights were broken, the solar panels stayed tight, the cargo carrier resisted the storm.  Mr. Kitty gave me the “you’re back from the dangerous expedition!” meows, but quickly calmed down and set to his favorite hobby, eating. I counted six trees uprooted around the edges of the parking lot, massive roots exposed to the air.

Reports say the funnel cloud touched down about a mile past where I was. My research suggests this was the fourth tornado this town has seen in 2017, unless I missed one. The storm system was huge, stretching along the entire western half of the U.S. Gulf Coast. Only one person was killed.

Weather Underground tells me the wind was 60 miles per hour at the peak of the storm. For an idea of what that looks like, here’s a short video of a 60 mile per hour storm from about 6 years ago:

The storm I lived through Sunday night was a 10 on the 12-point Beaufort Wind Force Scale, also known as a whole gale. At sea, it would have created 30 to 40 foot waves. A hurricane, ranked 12 on the scale, comes with winds above 73 miles per hour.

Today I am grateful to be alive and more respectful of the power of sudden storms than ever before. I have lived through a few tornadoes, but always inside a solid house, never outside. Winds that high are like a solid mass with an irresistible force. My life was at risk, but the wind also saved my life when it picked me up off the ground and dropped me, just in time to miss getting hit by those tables that whisked past my head.

I have talked before about how calm I can be in a true crisis. My autistic neurology sends me into a panic when little things go wrong, but every time I have been in a genuine crisis situation, I have been the calmest person on the scene, guiding people who are standing frozen in their tracks to call for an ambulance, enacting or instructing others in emergency first aid for injured people, putting out fires, finding that one elusive, clever way out of the path of disaster bearing down. When seconds count, I tend to think fast and fall apart later.

I have talked to other Autistics who express similar wiring and related experiences. It’s strange to think that so many of us are people who might get so upset we melt into an emotional puddle because someone ate the last of the breakfast cereal while we were asleep yet when quick thinking matters, we rush forward to save ourselves or others.

My Sunday night could have been a lot worse than it was. But when I think back over it all, I am pleased with my choices. I didn’t see anything I recognized as alarming about the sky — now I have a better idea of what a wall cloud (something I had never seen before) can bring. I am used to the sky turning green before a tornado, but my previous tornadoes were all in Kentucky. Weather is a bit different down here, it seems. Overall, I made fast, good decisions under pressure.

May I never experience sudden severe weather again. But if/when I do, I feel much more confident about my ability to spring to action when the going really gets rough.